The Academy
About
The Team
Careers
Insights
Contact Us 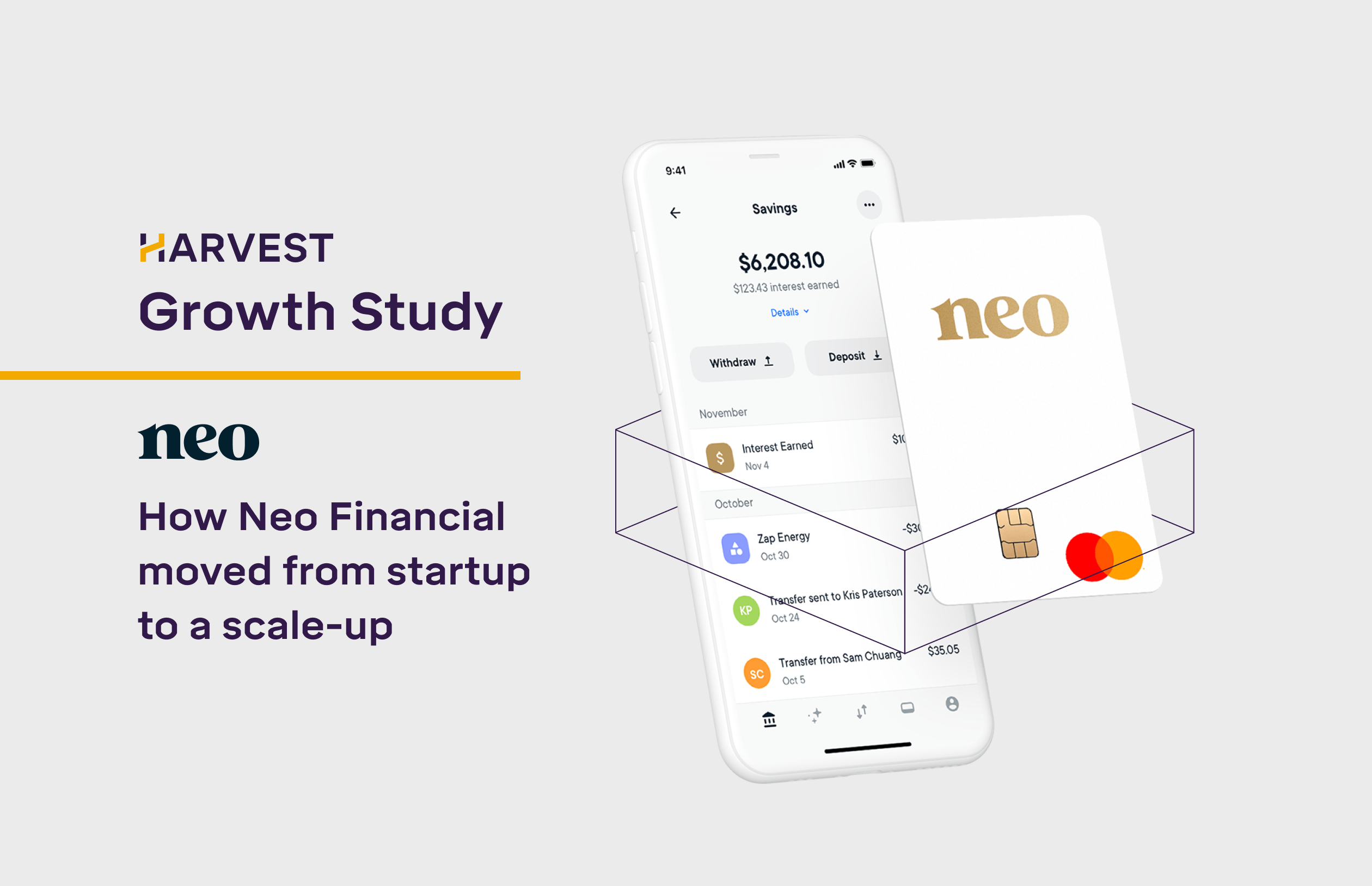 Scaling just for the sake of it only sinks your startup.

That’s why you should have a clear understanding of your target market, a viable product, and solidified funding. Toss in strong company culture and you have yourself all the ingredients for explosive growth.

For a company like Neo Financial that’s reimagining the Canadian banking industry for the better, and who checks off all the boxes, a scale-up was always part of the picture.

As the first company within Harvest’s fintech portfolio, Neo began scaling not long after its first birthday in September 2019. Its cashback credit card and high-interest savings account turned enough heads and app downloads to garner the attention of high-profile investors, raising $50 million in its Series A round last year.

So, how do you keep up and hire for a fast-growing tech startup based in the Prairies? And what’s the key to riding this high all the way through to the finish line?

At Harvest, we’ve helped Neo implement an end-to-end talent management strategy that not only allowed them to scale rapidly but also helped sustain their growth to meet long-term company goals.

The first few hires you make set the tone for the future of your company, so there’s no overstating how important it is to get it right.

Neo’s founding team doesn’t get much stronger than the collective spirit, wit, and experience of former SkipTheDishes co-founders Andrew Chau and Jeff Adamson, and CTO Kris Read. So it’s not surprising that they already knew what their team would look like prior to their initial hiring round.

First on their agenda was to hire stellar principal developers, and to do it fast. Neo concentrated on bringing on strong technical calibre into the picture, who were doubly excited to learn new tech stacks.

“Senior tech roles are first to fill on the list,” says Arlin Dueck, Head of People Operations at Harvest. “They’re the people building your company, your product, so they must be prioritized. Then you bring in your product managers.”

The co-founders recruited high-performing developers they entrusted to engineer their product, which led to a bullish execution for Neo’s early tech recruitment strategy.

Together, Harvest helped design a long-term workforce plan that anticipated Neo’s business needs and future roles in order to meet their mission of creating a better financial experience for all Canadians.

Primary developers, as well as operations and product managers stacked up the engineering and product teams before eventually rounding them out with supporting junior positions. Knowing full well that the right skills and right attitudes never stay on the market for long, a significant part of Neo’s recruitment strategy was dedicated to sourcing internal candidates, which are more than twice as efficient to hire.

Tech-savvy people love a good challenge. It’s what they hunger for in their careers, and if they’re not satisfied, they’ll go looking elsewhere. How Neo attracts and ultimately wins over tech talent from the competition is its work in the fintech space.

“We use the most modern microservices-based banking systems in the world,” says CTO, Kris Read. “Building a banking back-end is challenging with a higher than usual emphasis on good code, good patterns, and good unity testing. Neo is a leader matching the kind of tech built at companies like Airbnb. It’s the kind of code I’ve always dreamed of writing.”

“The chance to push the envelope and affect real change in the banking industry is Neo’s strongest selling point,” says Kelsey Brown, Talent Acquisition Partner at Harvest. “Even though there is a tech talent shortage in the Prairies, tech professionals want interesting problems to solve, and the impact of your work at Neo is undeniable.”

Word travels fast from the inside out

Assuming you’ve secured adequate funding, the prime time to scale your business is usually the period between launching your product and getting enough traction from your customers. The key thing according to Dueck is to always be proactive with recruitment.

“Never stop acting like you’re done growing, he says. “Even when you don’t have the budget. Recruitment is an all-hands-on-deck effort. It’s the responsibility of the whole team.”

Perhaps one of the most effective ways Neo scaled was through word of mouth. Their team didn’t hesitate to share their unique experiences working at the fintech and the exciting products they were innovating. Spreading the word to their friends and family allowed the company to fortify its credibility and brand awareness tenfold.

“The opportunity to scale doesn’t just fall from the sky,” Dueck remarks. “It’s the result of the people we bring on our teams. That passion and unrelenting work ethic of Neo’s earliest hires is what summons bigger projects, partnerships, attention...and the next thing you know, you’re scaling.”

Each month, Neo saw exponential growth in their headcount as they introduced new departments as well as added support to round out their teams. Their strategy recognized the need to expand their scope nationally and internationally, as tech talent has yet to be evenly distributed across Canada.

To expand their company footprint across the Prairies, they opened an office in Winnipeg, but that alone wasn’t enough. To form the best possible team, Neo made it clear to converge the world’s best talent in the Prairies by supporting remote work in countries like South Africa, Brazil, and Germany with the eventual long-term goals to relocate them to Calgary.

“Scaling is about growing your team’s potential, but never at the expense of your culture,” adds Brown. “Even when technical ability is really strong, Neo prioritizes culture and how people work together.”

A defined purpose, strong leadership, and teamwork are just a few of the words used by many within Neo to describe their culture. Granted, cultivating a strong company culture is a lot easier to do with a team of 10 people than it is with 100. So as teams scale, it’s imperative that incoming hires personify the aspirations and attitudes of the business’ end-goal.

The common thread between every person at Neo is their motivation.

“There’s no trick in the book. Neo’s team is intrinsically motivated,” says Brown. “They’re not people who watch the clock but instead, care about results and want to see everyone succeed. That mutual understanding of responsibility and respect is what grounds them, no matter how many new people join the team. That’s the kind of culture that perseveres.”

All this talk about finding cultural fit doesn’t come without acknowledging long-term implications.

The tech industry has the highest employee turnover in any business sector. With a 13.2 percent churn rate, people are leaving every 1–2 years and the main culprit is lack of career development.

When employees don’t experience opportunities to grow their careers, they aren’t willing to stay for the long haul. This poses a major challenge for companies that need to scale and require the much-needed talent to run their business.

So, what are the best practices for sustaining long-term employees?

“Startups evolve quickly and unpredictably, and so will the demands of the team,” explains Dueck. “It’s one of the few places that can outgrow everyone’s current skills and roles – but that’s not necessarily a bad sign. In fact, some tech turnover is normal and good – it keeps your team’s skills fresh, and people can move around different tech stacks, and stay excited.”

“Rapid growth startups achieve many of their goals much faster than the average company would," adds Dueck. "With Neo especially, they’re constantly in a state of challenging and outdoing themselves, with a goal as ambitious to reinvent banking.”

Here’s how to move from a tech startup to a scale-up through a recruitment lens: